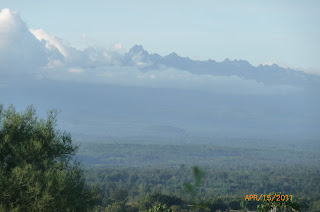 Our excellent cooks at Kiria-ini, KE 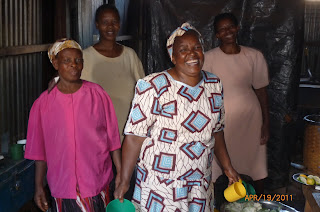 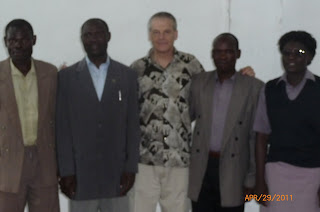 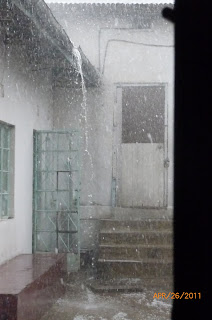 I made it back from a successful 4 weeks in Kenya yesterday afternoon. Was pretty tired, so went to sleep about 8:30PM, but woke up at 2:00AM. After thrashing about for 45 minutes I decided to just get up. It usually takes 3-4 days to resume a normal sleep pattern.
Following our 1 Timothy conference in Nanyuki, we (my friend Stan Schug as well as my African EPI teaching partners and I) did another 1 Timothy conference in Kiria-ini, where I never had been. We then travelled to Nairobi where we premiered our course on Biblical Theology. This course is a little more "theological" than some of the other more practically-oriented courses--but is of huge foundational importance. In Biblical Theology we discuss: (1) the overall story-line of the Bible, from Genesis to Revelation; (2) two important themes that pervade the Bible (God's dwelling with humanity as expressed in Eden, the tablernacle, the temple, Ezekiel's vision of a new temple, in Jesus, the church, and the new heaven and new earth; and God's relationship with humanity as expressed in terms of sex and marriage); and (3) how Christ and the church fulfill everything that the OT was about (e.g., the covenants, Israel and its institutions [the feasts and festivals, the priesthood and sacrificial system, the law and the sabbath]). It is these latter aspects of Biblical Theology that I found most fascinating when preparing the written material. I hope this will give the pastors a much greater appreciation of the depth, profundity, and coherence of the Bible. It certainly did that for me.
We ended in the western Kenyan town of Webuye where we did another Expository Preaching TOT for 20 pastors: 10 Anglicans and 10 Pentecostals. That was put together by EPI's western Kenya coordinators Isabellah Inyele Okapesi (Anglican) and Justus Wafula (Pentecostal). Some strides were made, but further work remains to be done. We all agreed that, when I return to Kenya in the fall we will try to do "round 2" of Expository Preaching with the same group in western Kenya. I am convinced that it probably will take 3 rounds of 4-day TOTs for the participants to really get a good grip on what we are trying to do with respect to preaching. When that happens, it can be transformative (and I think the participants got a glimmer of undertanding that).

Thanks to my friends at Desiing God Ministries, I was able to distribute copies of John Piper's The Supremacy of God in Preaching to both the Nairobi and Webuye Expository Preaching classes. That book complements my Expository Preaching written notes and, if digested, will help the pastors appreciate the importance of preaching and become better preachers. Since preaching is perhaps the number one responsibility of a pastor, and is the one activity in which he or she regularly interacts with all of his or her parishioners, I want to try to do as many Expository Preaching sessions as I can in the future.

I will now be home until June 3, when I leave for Tanzania and the coast of Kenya. While home I will try to finish my notes on Biblical Eschatology (although I may not be able to complete them until July, after the TZ trip). I am about 4/5 through what will end up being around 160 pages or maybe even a little more. It is an important subject, and we received several questions concening eschatology during the Biblical Theology conference. All of my notes are available on EPI's website: http://www.equippingpastors.com/ (click on "resources").

As always, I thank you for your prayers and financial support. Stan's and my health remained good, and we had no real logistical problems (those are always two of my primary concerns when I am in Africa). Further, Stan is planning on returning to Kenya when I go there again next April! He made several contacts with respect to prison ministry and even with respect to motorcycle ministry (both of which he has been involved in for several years). You never know what doors God will open for you when you take Him seriously (so consider coming to Africa with me)!

Take care. I will stay in touch. In His Name, Jonathan
Posted by Jonathan and Nancy Menn at 7:21 AM No comments: 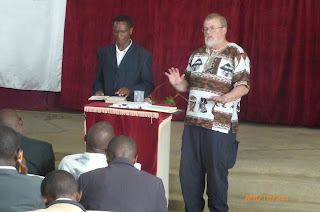 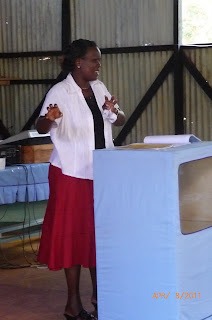 JMM with my excellent translator, Geoffrey, at Nyahururu, KE 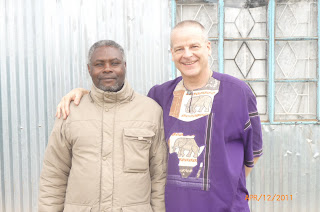 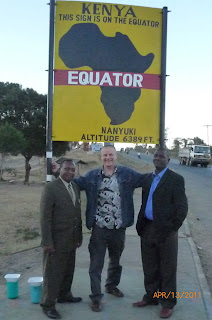 I have just returned from a month in Kenya. The following is the report I sent from the field to those on my email list:

Stan Schug and I are here in Kenya for the month of April. We have hit the ground running and haven't stopped. Expository Preaching in central Kenya involved about 20 pastors, most of whom had been at a prior Expository Preaching TOT. As in the earlier session, I concentrated on 4 things: problem/issue-based introductions; propositions; organizational sentences; and application. We spent most of our time analyzing OT and NT passages of Scripture, and then suggesting ways to approach the 4 areas above. Passage analysis is almost foreign to many of the pastors. I want them to concentrate on seeing the one main thrust and big idea of each passage and, for the OT passages, see how Christ is present there. They all said that this was very important and helpful. The last 2 days of the four-day session included four 30-40 minute sermons and then critiques by me and the rest of the class. That was very important, as most pastors never have their sermons critiqued by anybody. Since we are starting from a fairly low baseline, we could do something like this again and again, until it becomes easier (if not "second nature"). The results are never what I would like to see, but I think this is making a difference. We will be doing another Expository Preaching TOT in western Kenya at the end of the month.

We then did a Biblical Marriage and Parenting conference in Murang'a. George Kariuki, EPI's Kenya national coordinator and host of this conference, had told the men: "Don't come if you don't bring your wife." As a result, we had over 50 couples. As was true last year in western Kenya, the star teacher was Lucy Kariuki! Particularly important were the two small group sessions in which the husbands and wives were separated. In the first session, each group discussed (and then gave a report to all the participants) on what they didn't like about the other party's actions and attitudes in the marriage. Both sides had fairly lengthy lists, centered around communication and trust, which manifest themselves financially, sexually, and in several other ways. The second small group session involved each group's deciding what WE (as wives or husbands) COMMIT to do to make our marriage better. The reports demonstrated great insight and humility. Significantly, the wives began their report by saying, "We are here to stay" (i.e., regardless of the situation, we are committed to you for life). The husbands' report began, "What we shall do, we shall do unconditionally" (i.e., we will start living like Christ regardless of how it is reciprocated). I think there will be great healing. Please pray for these dear people.

We then did a conference on Biblical Stewardship in Nyahururu, where we had been last year. The conference began slowly, but then ended well, I thought. Particularly important were the discussions of budgeting and finance. We are now in Nanyuki, where I have not been before, which is near Mount Kenya and right on the equator, doing a conference on 1 Timothy. An interesting bit of fall-out from the conference in Nyahururu was that someone called the pastor of the church here in Nanyuki and told him that we were speaking against the so-called "prosperity gospel." Evidently, he is a "prosperity" preacher and he therefore revoked the use of his church for our 1 Timothy conference (the day before our conference was to begin). Fortunately, we were able to get a new venue (another church), and the conference is proceeding well, with about 70 attendees.

God is also working out some interesting contacts for Stan. He has been involved in the Christian Motorcyclists Association, and with jail/prison ministry for many years. He had not necessarily come here with the intent of coming back. However, many people drive motorbikes here, and there is no CMA chapter in Kenya (as there is in many countries). Ministry to prisoners is very important. Stan is planning on preparing materials regarding this, and at least 2 pastors with experience in this area have talked with him and given him their contact information. Thus, just like my friend Frank Cummings has found an important role here in East Africa teaching pastors how to biblically counsel, Stan may also have found an important niche where the need is great and the resources are few. It's amazing what God does when we make ourselves available.

Thank you for your prayers and financial support. You are making a difference. In His Name, Jonathan

PS-Thanks to the generosity of Desiring God Ministries, I was able to deliver 2 boxes of excellent books to 2 pastors (one in Nairobi and one in Karatina). When we work together, much can be done to advance the Kingdom.
Posted by Jonathan and Nancy Menn at 7:11 AM No comments: