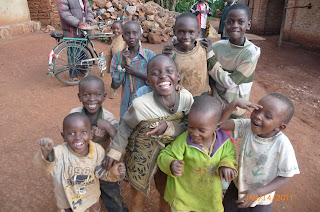 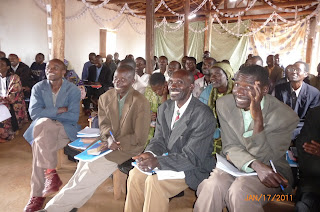 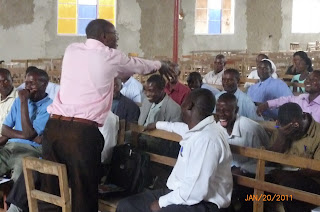 The following is from my email update posted from Burundi about 2 weeks ago. If you would like to be included on my email list, please email me at: jonathanmenn@yahoo.com.
Theophile Rugubira and I have been working hard in Burundi. Our first pastors conference was in the eastern village of Kobero, which is along the border with Tanzania. 50 participants had been budgeted for, but 71 showed up, including a pastor from across the border. We did our introductory course of 1 Timothy, since we had not been to Kobero before. Very few people in Burundi speak English, especially people in the villages. Fortunately, we were able to distribute copies of the Kirundi version of the 1 Timothy notes (even though it has not been fully edited and is not yet posted on the website). This shows how valuable the translation project is.
The conference itself went very well. Of the 71 participants, only one had ever studied an entire book of the Bible before section-by-section from beginning to end, and none had ever preached a series of sermons through an entire book of the Bible. The participants seemed very interested, appeared to learn a lot, and asked lots of questions. I want to try to have as much time for Q&A and discussion as possible, instead of using all of the time in lectures. The questions stimulate interest and demonstrate whether or not the participants are understanding the subjects we deal with.
Theophile also had a very good suggestion. I had asked him to obtain the contact information of those participants who seemed the sharpest. He suggested that, instead of doing a separate follow-up session, he would do a TOT (Training of Trainers) with those "sharp tacks," and use that also to learn what the pastors are doing to follow-up on the conference. I think that is a great idea, since it achieves the ends of follow-up and makes sure that we push ahead with in-depth (TOT) training as soon as we can. It also makes sure that we use the general pastors conferences as a "winnowing process" to identify and train those who appear to have the potential to be good teachers.
From Kobero we traveled inland about 30 minutes to the village of Buhiga. 55 village pastors showed up for the 1 Timothy conference instead of the 50 we had planned on. Their comments were along the following lines: "Amazing." "We have never heard this before." "This is challenging us." One pastors told me, "This is so good it is making us shake." Another pastor told Theophile, "I have never heard this before. I never knew that 1 Timothy dealt with so many issues. If 1 Timothy has so much to say, I wonder what the other 65 books of the Bible have to say." That pastor had actually been to a Bible school. Comments like that make me both happy and very sad. Given the fact that most of the pastors are largely biblically illiterate (including, evidently, some of those involved in Bible schools), as Frederic Harerimana, our partner who arranged the Buhiga conference, said, "It is only by God's grace that we (the church) are still alive at all."
We are now finishing a Biblical Stewardship conference in the capital, Bujumbura. Both Theophile and I are of the same mind that we want to spend more time in the villages, rather than the large cities, because the village pastors have almost no theological education, resources, or opportunities to attend conferences or seminars, while the city pastors have somewhat more of those things. Our impact will likely be greater among the village pastors. Even here in the city, however, the pastors are being challenged. When we discussed family budgets, not a single one of the 35-40 pastors had a budget. After a lengthy discussion of getting control of one's finances, led by Theophile, the pastors commented: "At first this [i.e., our budgeting and finance recommendations] was like death, but after the discussion it was like resurrection." They committed to think about these things, and I am sure that several of them will start to apply what they learned. Within a year those who do should find themselves on the road to financial freedom. May God bless them as they try.
Having good African teachers like Theophile is hugely important. He has taught the majority of these sessions, and he leads all of the Q&A and discussion sessions (things flow so much better in the local language, rather than having to interpret into English). I am blessed to have him.
Posted by Jonathan and Nancy Menn at 9:44 AM